"She is a friend of mind. She gather me, man. The pieces I am, she gather them and give them back to me in all the right order. It's good, you know, when you got a woman who is a friend of your mind" Toni Morrison

Recently,  I was blessed enough to share space with Professor Angela Davis and listen on as she spoke of her upbringing, activism, and education. One of the things Professor Davis spoke on was the importance of building consciousness and community. As I snapped in appreciation for her words, I tried to swallow a deep rooted shame that bloomed from my chest.

I never questioned whether I would be attending the White Women’s March. In my time as an organizer I have learned a hard truth: it is impossible to march beside a white woman. It is always behind. Always an afterthought. Always a “we will get to” your issue. It will be hard to get to me once I’m dead, but they conveniently forget that our deaths are a women’s issue.

The capacity we have to forgive white women disgusts me to the point of wonder. How do the majority of you vote for hate and escape accountability? How do you never utter Sandra’s name and escape accountability? Why are you here? Oh yeah, for Trump. How many of you will march once the boogeyman is gone? How many mimosas will you throw back reminiscing about that time you were a part of the resistance? Will you wear your pink pussy hat to my funeral?

I wonder, more often than I’d like, if I owe these women community despite my aversion to glass ceiling feminism. Who am I to turn my back on anyone when I’ve spent the last four years asking people to become political? I wish I knew the answer to so many questions. I wish I knew how to de-center Trump from all this activism. 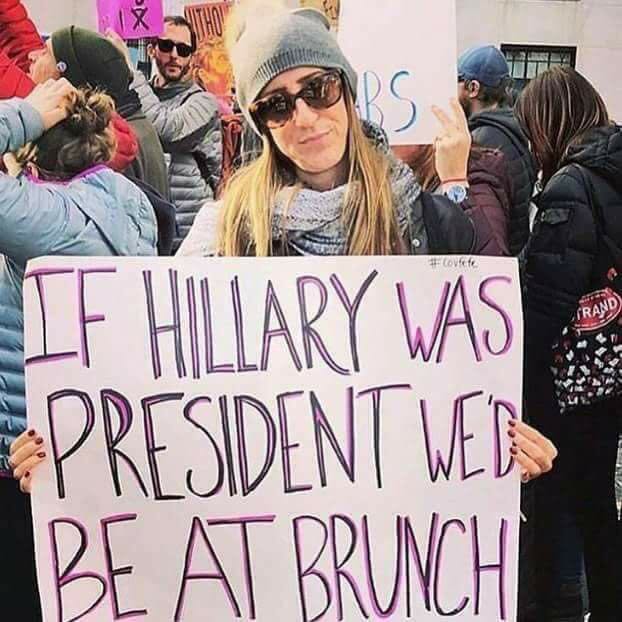 If Hillary was President, and you were all at brunch, would I be able to lure you away from waffles to lend your labor to brown women being abused and detained? It is so much more than Trump. I need a community that understands that. Perhaps it is my responsibility to build one, but I’m not sure if I can build community with women who think it appropriate to put place a pink hat on Harriet Tubman and call it solidarity. There is nothing a white woman can teach us about solidarity. We were born knowing instinctively that our freedom and justice was tied to others. It is the only way we can get anyone to listen, in any event.